Moringa’s growing wild all over the place! 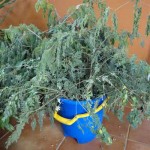 Nicaragua – January 2012:  I was excited to see moringa growing wild all over Managua!  In preparation for the two moringa trainings, I went out with Josue (an agricultural graduate student from the University of Nicaragua) to take cuttings from moringa trees that we’d found growing wild near the airport.  We cut a bunch of branches, brought them back to the Villa, washed them, put them in a bucket and offered tastes of the fresh leaves to anyone who was game to try them.  We got favorable responses to the flavor from everyone – they said they were mild and pleasant tasting.

I had a great translator named Angel.  He’s from Puerto Rico, but is now living in Nicaragua as he is engaged to marry a Nicaraguan girl.  Together, we conducted two introductory moringa training seminars.  Angel was really fun and brought a lot of joy to the trainings!  About 25 people attended the seminar at Villa Esperanza – both the older girls and the staff were there, including the cooks and the gardeners.  It was a lively group!  There was lots of interest and really good questions.  At the end, Wilbert challenged the cooks to a contest to see who could create the best recipe using moringa leaves.  We didn’t have a lot of leaves left, but on the last day I was there, Flor, the head cook, added them to the salad and served it to a work team from New York.  Excellent!

We also conducted a seminar for leaders and members from three churches, El Faro, Tipitapa, and Luz y Vida.  The El Faro and Tipitapa churches work with families living in the Managua and Tipitapa dumps.  (Tipitapa is a town just east of Managua.)  Miriam, one of the pastors at El Faro, manages a feeding program that serves approximately 400 children a day in La Chureca (the village inside the Managua dump) and in the Tipitapa dump.  Her plan is to grow moringa to add it to the feeding program to increase the nutritional intake of the children.

We had met Miriam last June when we were in La Chureca and had found the moringa trees already growing there.  After we shared with her about moringa, she got her own seeds and planted a tree at her house.  When I saw her again in January, she said, “I’m so glad that you’ve returned – my tree is 5’ tall and I need to know what to do with it!”   I love it!  The folks from the Luz y Vida church in Leon plan to plant moringa and train people in their community, which is in an area that struggles with issues of poverty, malnutrition and unsafe drinking water.

Both of these trainings were really exciting – it was great to see how excited people were about the tree and that they were already working on ideas and plans for how to use it in their communities.